The Galaxy, and the Ground Within

Dragons Conquer America is an aptronym, as the game dresses its stage with dragon riding Spanish conquistadors in Mesoamerica and the Andes. It is the first game by Spanish publisher Burning Games.

The book is bulky and heavy, more than 400 pages of coated paper. Not as bad as the infamous Hero System, which allegedly stopped bullets, but still beyond what I can comfortably hold and handle during a session. Given the desire for one book games, the publisher probably had little choice but to cram everything in one book – I would have definitely prefered several booklets.

The illustration are in the hyperrealistic fantasy style that is common today. They are well drawn, beautifully colourful and fit the book’s air. They are mostly just pretty though, and not used to illustrate a concept or rule that was described in the text around them. Generally, this is a common problem throughout the book: It looks pretty, but it is not easy to use. Something for the display cabinet, not for the workshop.

This becomes most obvious during the setting description. This dutifully describes the political system of Mesoamerica, the Inca Empire, and Europe with some important sites and political centres. The text does not include maps though, there is just one map at the back of the book. It also seems not properly focussed, the description of Europe gets as much space as the description of the New World – despite the book being centred on the New World. Even worse, the descriptions do not show how affairs in Europe might affect the New World, but just how Europe is set up. The descriptions are rather static as well; they only describe what happened so far, but not what the different entities or individuals aspire to.

The book was definitely not properly edited, probably not edited at all. I do not mind a misspelling or punctuation error now or then, but there are sentences that just stop in the middle and are never finished, or sentences without verbs. There are flavour paragraphs being repeated within two pages, while rules are glossed over. Examples only show when to apply a certain kind of check, but not how to actually resolve it. And, worst of all, the text is long-winded and dull instead of concise and dull.

Dragon Conquers America has its own rule system, with levels, classes, and skills. The rules are not tied to the setting, and could be easily converted into a generic rule set. There are some nifty ideas in the rules, like exhaustion or tyranny disposal.

The basic mechanism is to draw cards from a poker deck, where each type of cards corresponds to one attribute. You play cards from your hand to overcome challenges and can play as many cards for any test as you like to reach the threshold. If you play a card that corresponds to the attribute for the check, you also get a boon. If you play all cards in your hand, you can no longer participate in a given scene (like a fight), because you have been completely exhausted. Tyranny disposal is a small minigame that includes support points, which measure how much support tyrant and rebels have among the populace. Both group and tyrant can spent their support points to hinder their adversary or help their cause.

As I understand it, all classes use magic, in a Gloranthan kind of way. Some of these magic system are somewhat exotic, even though not as exotic as those in REIGN, but most are generic magic systems with a New World wrap. Same is true for plot ideas, most could be used in any fantasy setting and are not specific for Dragons Conquer America (even though I found a list of RPG Plots for Mesoamerica elsewhere).

The game has some good ideas, but the execution is flawed. With a proper editing, it would probably reach a C+, but in its given state, it is more a C−. I would not recommend this game, despite the few alternatives I know.

The rules have some interesting bits, but nothing spectacular. As many players dislike learning new rules, most groups are probably better of with a Meso- or Southamerican setting book for an established ruleset like Maztica / Lopango (AD&D Forgotten Realms), Sons of Azca (BD&D Mystara), Aztecs: Empire Of The Dying Sun (d20), GURPS Aztecs (GURPS 3), Mysteries of Mesoamerica (Call of Cthulhu RPG) or Im Land des Mondjaguars (Midgard – Das Fantasy-Rollenspiel).

Minds Eye Theatre is the LARP version of the various rules for White Wolf’s World of Darkness setting. As I have little knowledge about LARP and do not particularly like it, I will mostly voice my opinion on how useful this book is for traditional pen-and-paper games instead.

I should mention that this book was a gift from Teylen, an avid World of Darkness fan and good friend. Otherwise, I have little connection to the WoD and rather play OSR games. Thus, I will not review the game in regard to WoD canon, but rather how well it stands on its own, and how it compares to the Vampire rules and the Gamma Slice I reviewed some time ago. 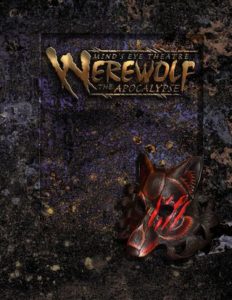 Generally, not much changed compared to Vampire: the Masquerade. There are 800 pages with dense writing and a couple full page pictures of werewolves that are probably meant to symbolize the different tribes (at least the symbols align with the symbols shown in the tribe chapter). The layout is not fanciful, but mostly well done. I would welcome markings on the outer margins to quickly find the beginnings of chapters, generally reading the book is easy, but finding something is difficult. Also, in some cases the book refers to terms that are only explained later without linking to them.

The short stories between the chapters are less coherent than the ones in Vampire. Where Vampire offers one character that leads you through the different steps of playing a Vampire, Werewolf constantly changes characters and mainly concentrates on beating stuff up. They do not help me at all in playing a werewolf, unless this is meant to be a tabletop skirmish game.

Whereas Vampire played simply in a slightly more gothic version of our own world, the world of Werewolf is a dystopian post-apocalyptic version of our world. Just a couple years ago, the werwolves fought a host of invading Wyrm forces (the Wyrm is the main antagonist in Werwolf) to a standstill, hardly keeping any of their Caerns (sacred wolf’s den) intact.

Recently, they defeated several of their enemies though and even managed to find a way to create new Caerns. If they manage to keep them intact for a couple years, the damage will be healed. Of course, the Wyrm sends his forces to destroy them, and several other supernatural creatures are keen on using them for their own purpose as well.

The metaphysical background for the Werewolf worlds are three spirits: The Wyrm (destroyer), the Weaver (keeper), and Gaia (creator). Originally, all three of them kept each other in balance, but the Wyrm got caught in the Weaver’s net, and now everything is going down the drain because the balance shattered. Also, humanity used the chance to break free from the weaver, which somehow results in the world becoming more and more attuned to the weaver. That, again, prevents the werewolves from keeping humans developing technology (as Gaia commanded them), which in turn means that the werewolves cannot do their job anymore.

Except for the Red Talons (one of the werewolf tribes), nobody seems to mind though, and I absolutely do not understand why. Werewolfs were created to keep humanity in check, but mostly ignore them (and occassionally defend them against the Wyrm). Some werewolves even manage to live and work in cities, even though that should (by the rules) drive any human in their vicinity insane within less than two hours. In Vampire, I had a reason why my character tried to remain humane (and how he did so), but there is no such reason for Werewolves whatsoever. This makes Werewolves a much more monstrous game than Vampire in my opinion: In vampire you mourn for your lost humanity, whereas in Werewolf you simply do what needs to be done, in this case commiting as much genocide as you can with your limited ressources.

Even though the game is called Werewolf, there are plenty other Fera (animals that can change into human form) around. They mostly get along, and are mechanically similar to werewolves. The biggest exception are the were-spiders, which are working for the Weaver instead of Gaia.

The organization of shaperchangers is much more convulated than that of Vampires. For Vampire, you decide for one of two sects and a clan. For Werewolves, you have the Garou nation (a confederacy of all werewolfs and some Fera), and a couple unaffiliated Fera. Within the Garou nation, there are two parties: The Confederacy of Stars (Progressive Shapechanger Party) and the Gaia Nation (Conservative Shapechanger Party). All tribes (and some Fera) belong to one of the two parties. Then you have tribes, a bunch of wolves who consider themselves related by blood and share certain characteristics. Within each tribe (and most Fera), you also find three camps (usually sages, rogues and fighters). On the last political level, werewolves belong to septs (villages) and packs. On a mythical level, they also have to choose an Auspice, which influences their abilities.

Even though there seems to be way more options compared to Vampire (which only had clans and sects), I feel much more shoehorned in creating my character. The games uses many of those units, but they seem incoherent and convuluted.

Werwolf brings a whole bunch of new rules along, but keeps the basis rules from Vampire with just a few cosmetic changes (supernatural beings are now allowed to use smartphones to call people and to send text messages, for example). You still play rock-paper-scissors to figure out who won, with skills acting as tie-breakers.

The rather simply Humanity and Blood mechanic of Vampire has been increased to a combination of Gnosis, Rage, Seethe, Harano and Wyrm Taint. All of those are gained and lost differently, and used for different purposes. Where in Vampire you may fall to the Beast that lurks within, in Werewolf you can fall victim to the Curse, into Frenzy or into Despair.

As additional social rules, there are Challenges, which regulate strife between werewolfs, and Moots, which solve political problems. This all on top of the system for Renown and Favours that were already introduced with Vampire.

Now, the news rules are not necessarily bad. Often, they are used for excellent effect, for example the combination of totem, sept and auspices is just great. It is just the sheer amount of different stats that are overwhelming.

After reading VtM, I had an idea how to play Vampire – after reading Werewolf, I was completely at a loss. After reading Vampire, I understood why the Vampires do what they do and why they are organized the way they are organized. With Werewolf, everything seems to be slightly out of touch, as if somehow artifically imprinted an external frame onto the setting. Vampire: the Masquerade could get away with medicore rules because of its immense flavour and evocative setting. With Werewolf, the setting seems just as mediocre as the rules.

I do not like Werewolf: the Apocalypse, it lacks everything that I liked about Vampire. I can only imagine using Werewolf as an inspiration for a setting of my own, but could not imagine playing it as written.