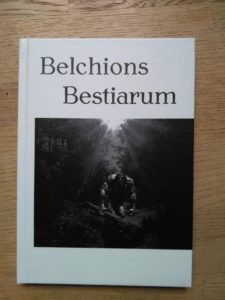 This week was an exception, as only one player was present. Since that player had been separated from the group and wanted to test a theory, we played nonetheless:

Roderick triggered the mechanism several more times, ending in different combinations of tunnels leading into or away from the middle point:

He also figured out that he was not lifted when he activated the mechanism, but instead was spun arround very quickly, disorienting him.

He was unable to find Tapio again, despite several tries, and followed the marks Dargoth had left during the game before toward a door behind which he heard furniture being moved.

Again, the group delved into the dungeon and considered using the title theme from Scooby Doo as guideline for their actions.

The group returned to the great storage room through the dungeon and searched it for treasure, finding mostly foodstuff, but also a snuff box, a golden amulet, a silver amulet (which, when identified showed as magic void), and some minor trinkets. The silver amulet burnt the werewolf, but did not change her form, and also did not prevent Dargoth from casting spells when he wore it.

The group attempted to rest in the storage room afterwards, but was disturbed by a bat flying in, diving for their camp fire! Luckily, La Fleur nailed it with a Magic Missile before it came into contact with the fire.

Even though everyone but Dargoth acted before the bat, nobody was able to hit it. La Fleur, the last to act before the bat, decided to Magic Missile it to circumvent the bad luck with attack rolls. Which was quite overkill for a completely ordinary bat, but the results speak for themselves.

When Roderick investigated the most sincerely dead bat, he found a small pouch with a horrible balm bound to its leg. Dargoth later recognized the powder as an instant demon, which would arise if the balm is set aflame. They decided to put the balm into the empty snuff box and gave it Roderick for safekeeping.

Afterwards, they considered setting a trap for their enemy, but finally decided against it as they considered it to risky during night. Instead, they pressed on through the dungeon in a hope to bring the fight to the enemy.

They returned to the kitchen where they removed the stove from the well. An eerie light washed over the slain and already partly scavenged giant rats, and La Fleur smashed and burnt the corpses just to be safe. Once the stove was removed, Tapio was sent scouting into the well, where he found a tunnel which lead to a room with a shelf, many bones and a cleaver. The others followed, and only Dargoth awakened whatever lurks deep in the well, but it was probably sleepy as it just tugged at the rope with a tentacle and then retreated again.

This was a great amount of luck for the players: Not only made most of the group extremely good stealth rolls, but their opponent also rolled very poor.

There were two exits from the room, one west and one east. The group headed east, and quickly came to a T-section. They heard howling from the north, noticed they had left the hogtied wyfwolf in the kitchen, and decided to go south till they got to a crossing.

Dargoth found tracks leading west, and Roderick a strong curving wall to the east. The group parted, with Dargoth and La Fleur following the tracks, while Roderick and Tapio inspected the curved tunnel.

The tunnels led on for some time, in a sharp bent. After a little while, they reached a crossing, the curved wall continued beyond, but one could also go north and south. Tapio remained at the crossing, while Roderick went a little south till he reached yet another crossing. Once he stepped into the middle of the crossing, one could heard a loud clanking sound, while dust filled the air. Roderick quickly jumped forward and ended up in front of Tapio, even though he had jumped away from him. Roderick afterwards followed the curved tunnel and finally appeared behind Tapio.

Meanwhile, La Fleur and Dargoth had followed the tracks and reached a door. They could not hear anything behind the door, and opened it. Behind, they saw an extremely cramped storage room full of furniture and, hardly to be seen, a leg beneath one of the furniture. Dargoth went in to investigate, suspecting foul play, and was right: The bones started moving once he looked at them. La Fleur dashed in as well to help him, but her magic did not do any damage, while she was hit by two attacks and lost conciousness. Dargoth hardly noticed this, as he smashed his way through the skeletons without taking damage.

This fight should have been easy, but the dice had conspired against La Fleur: Not only was she attacked twice, but both of these attacks hit with and one even hit critically. This caused sufficient damage to reduce her to −1 hit points, which meant that she was at 0 hitpoints, unconcious and had to roll death saves. Then her luck returned though, as she rolled a 20 on her very first death save, which caused her to regain 1 hit point and get back on her feet, where she could even cast an (albeit unsuccesful) spell.

Dargoth and La Fleur decided to prepare the cramped room as a resting space, while Tapio and Roderick were still puzzled as to where they were.