The Cthonic Codex offers you to play in the Valley of Fire, where several great school of magicians compete with each other and send their apprentices on adventurous tasks. It was written for the 5MORE rules from the Adventure Fantasy Game, but brings also along compatibility information for OSR games. It was released by Lost Pages.

As the name cthonic codex implies, the setting takes place underground, in a series of canyons and tunnels beneath the Valley of Fire. Central are the five great schools of magic vying for power, but the two lesser schools, remnants of the squid empire, dragons and some other groups are involved as well.

The art in the book strikes me first. It is bizarre, sometimes eerie, but I find it very inspirational and the cover picture is just beautiful – definitely one of the most beautiful cover pictures for Roleplaying Games I have seen. (You can find very good photos of them on the publishers homepage: What’s in a boxed set: the picture post.) 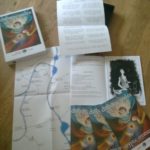 As with Into the Odd, which is also distributed by Lost Pages, the layout is really horrible. Different fonts change seemingly without rhyme or reason, for example, within the monster manual all rules text is written in cursive to distinguish it from the monster’s in-world description – most likely because the different font meant to achieve this was not different enough. It does not help either that the “creature compendium” is listed as first book, even though it is difficult to understand without some setting information from “mysteries & mystagogues”, listed as the third book.

Furthermore, illustrations are merely used to adorn the book instead of a tool. For example, the very nifty setting and map creation rules are a description of how to draw something, completely in text. The box only contains the final result, but no sketches of how to get there – luckily, Harald already created illustrations for the different steps: Chthonic Codex: Chthonotron in action.

Once one gets through this mess, the setting begins to shine though. The magic, be it spells, fetishes, idols or even cantrips, comes with a different air, powerful but with caveats. Laws of magic influence the world, with the cause always remaining completely arbitrary for the characters. All in all, the magic in this setting feels somehow magical without going completely bizarre (even though sometimes it skirts weirdness).

Other than more traditional settings, you cannot use the Chthonic Codex out of the box. It requires some time and effort to familiarize yourself with the mindset and the rules, as it only highlights the important points and leaves it to the reader to draw the connections. That makes it very easy to customize the world to your needs (as Harald did in his Sylvan Realm), but of course also means you have to conjure your NPC from thin air.

Basically, this setting offers you a good approach to magic, turns academical disputes, higher education and university politics into adventurous stuff, and countless of inspiration to be included into any setting. While I would probably not use it as my main setting (except perhaps for a mini campaign), I will definitely sprinkle content from the codex into my other games.